Skip to content
Hello everyone! Hope your week is off to a great start!
Today I have four floral cards to share with you. Last week Penny Black has released an amazing collection, called Secret Garden. Some cute, whimsical and pretty spring-y floral designs along with very unique stand alone dies, there is everything you need for your Spring card making :)!

My first card is featuring one of the beautiful outline floral cling stamps. It is called Alluring Arrangement (40-725), a pretty arrangement of Spring flowers! 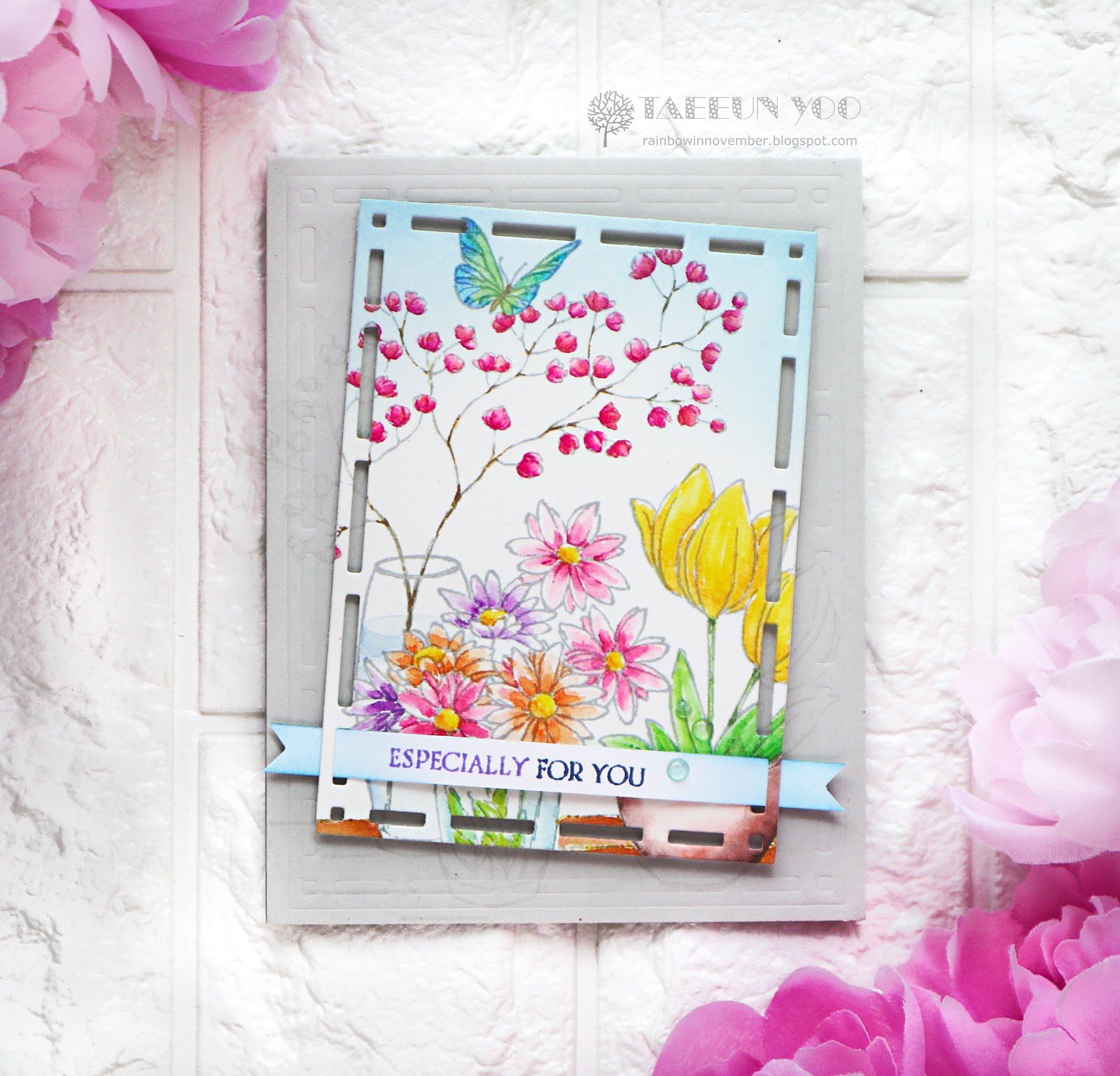 I wanted to do some spotlight coloring. But unhappily it failed, because the gray ink was too light that I used to stamp the image on the base layer :). Anyhow I wanted to let you know what I intended to do:).

I stamped the Alluring Arrangement (40-725) on a light gray cardbase in Fog ink (SSS). I left the stamp in my MISTI and stamped the image again on a watercolor paper panel in Shadow gray Archival ink. 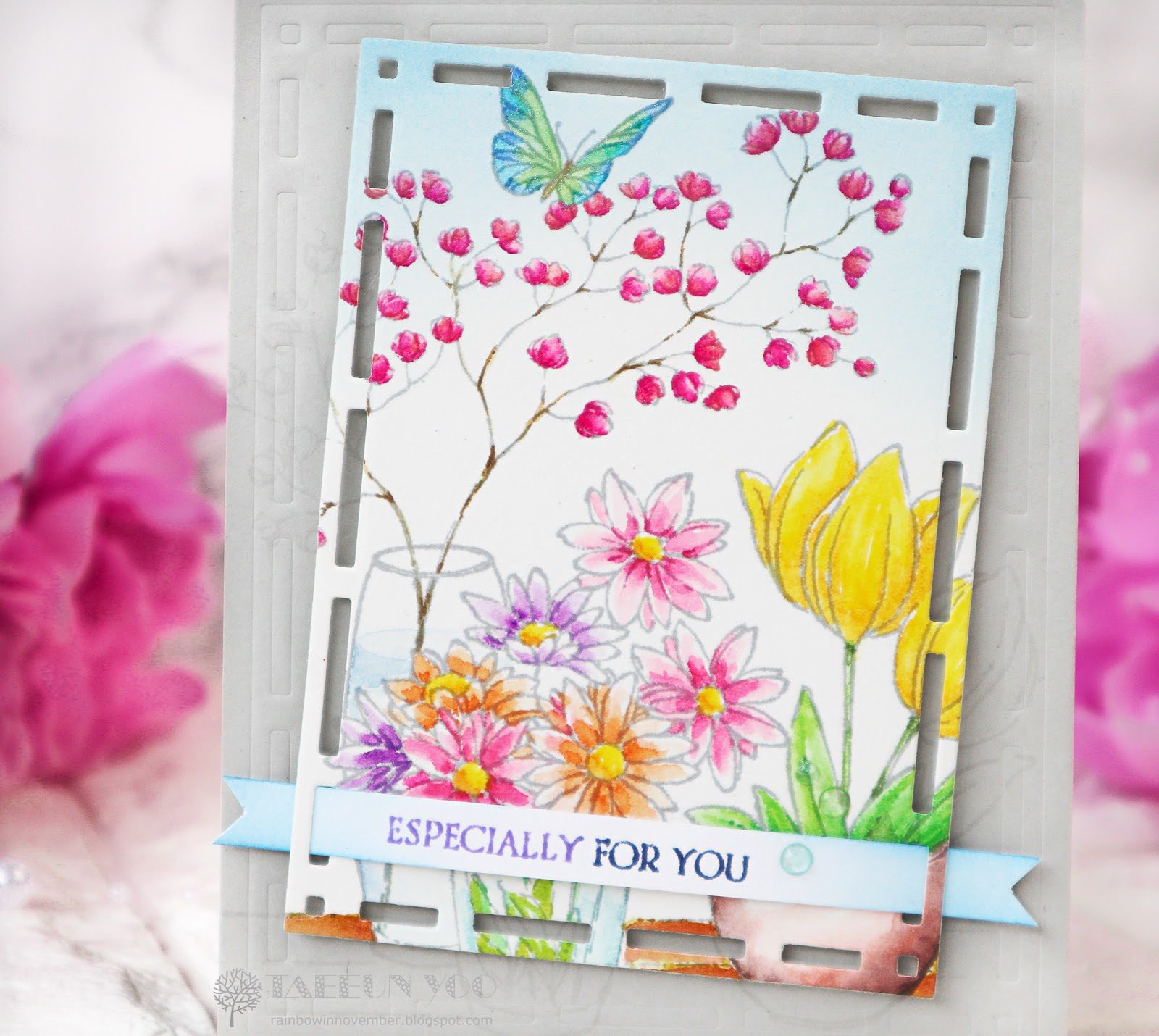 I colored the image using Karin brush markers. I didn’t pay that much attention on the details, and colored the image only loosely. After the coloring was done, I ink blended Salty Ocean DI on the top part of the panel. I then cut the panel slightly tilted using the second largest die from Simple Stackers die set (51-613). 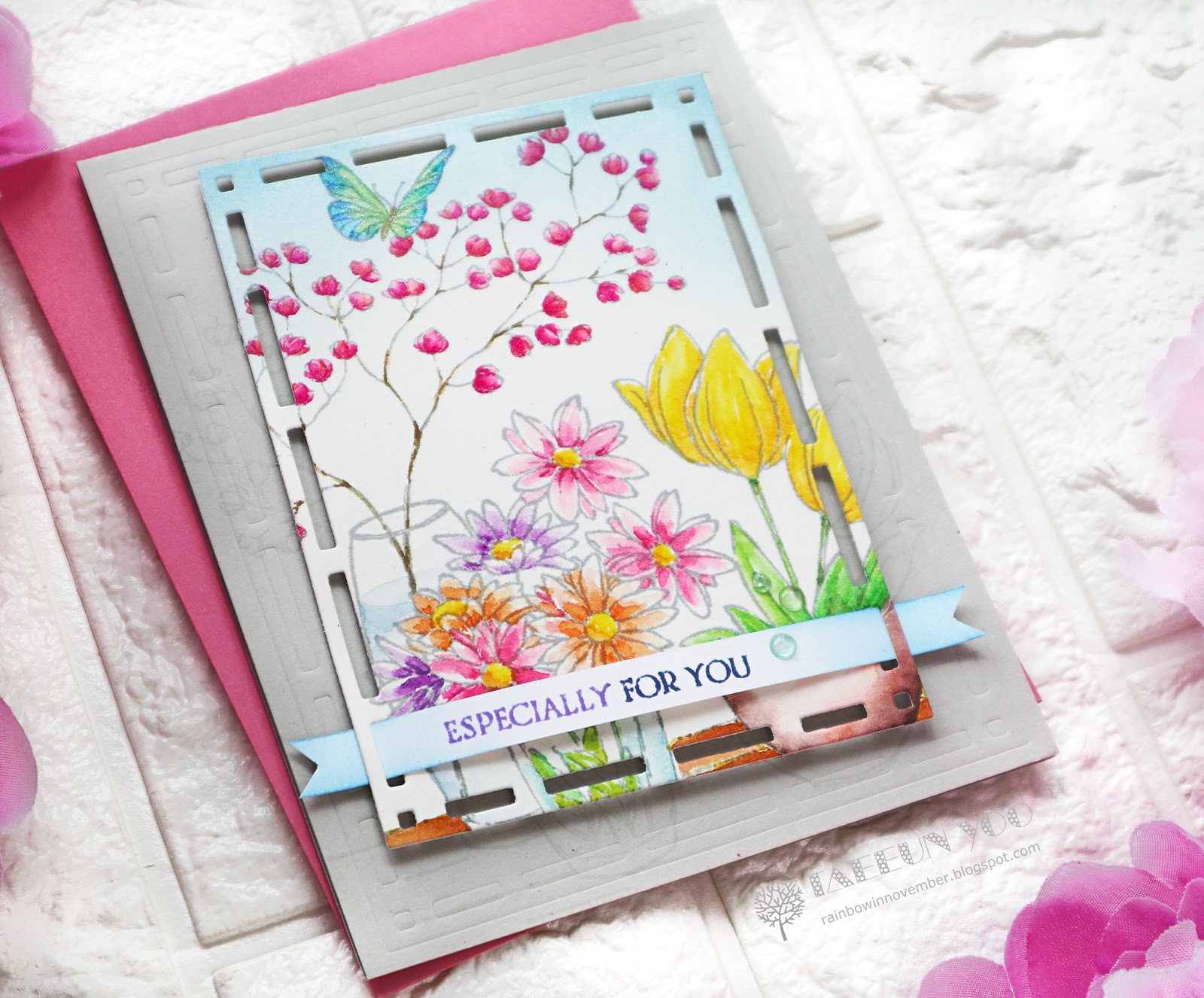 To add some more interest on the background I dry embossed the front of the cardbase using the largest die of the Simple Stackers die set (51-613). I then foam mounted the colored panel on the cardbase. The sentiment from Blooming Sentiments set (30-703) was stamped on a strip of white cardstock in Wilted Violet and Chipped Sapphire DI. I cut the strip in a long banner, ink blended the ends of the banner in Salty Ocean and tucked it in the slits of the front panel as shown in the picture. I finished off the card by adding three small clear Nuvo droplets. 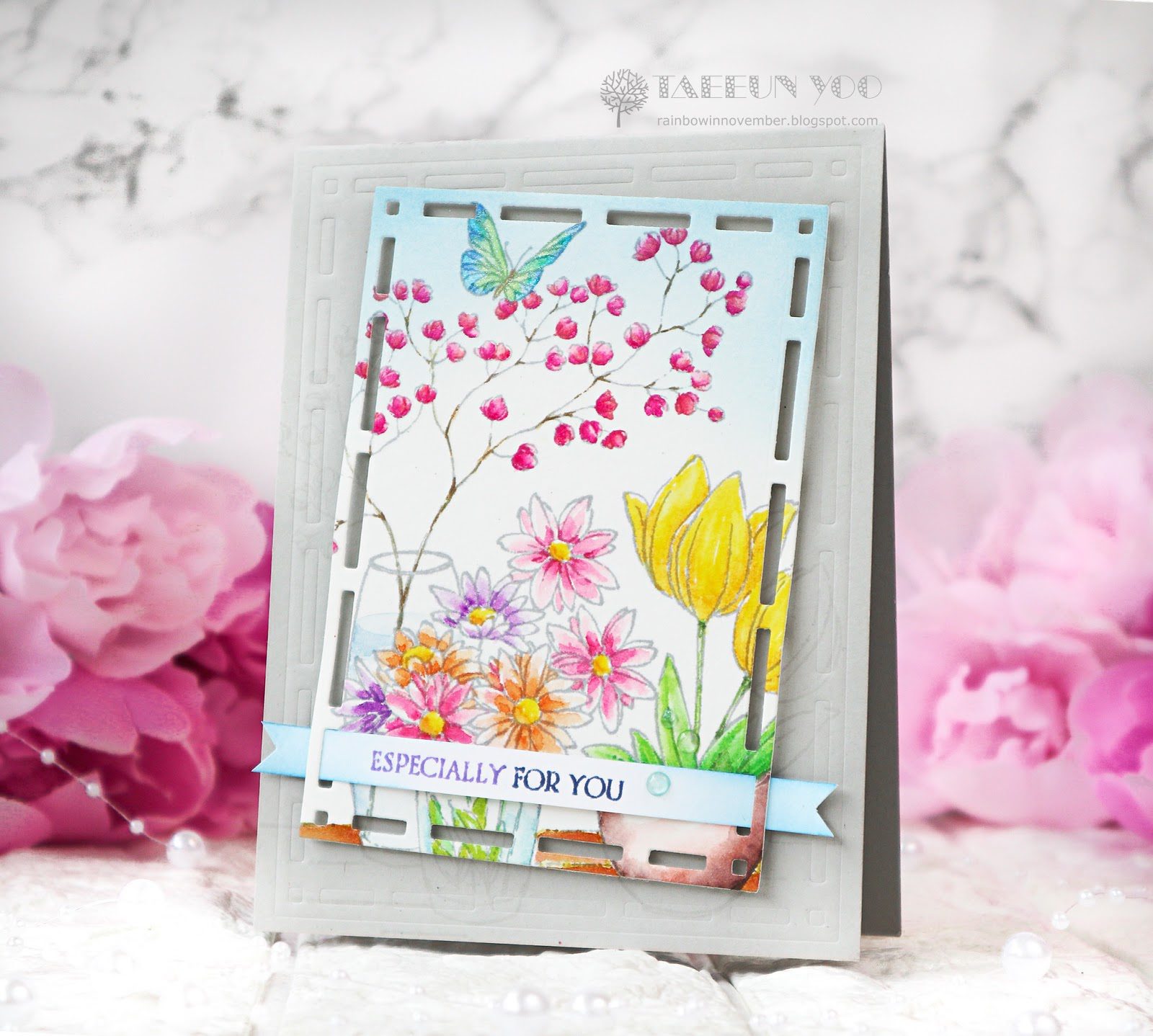 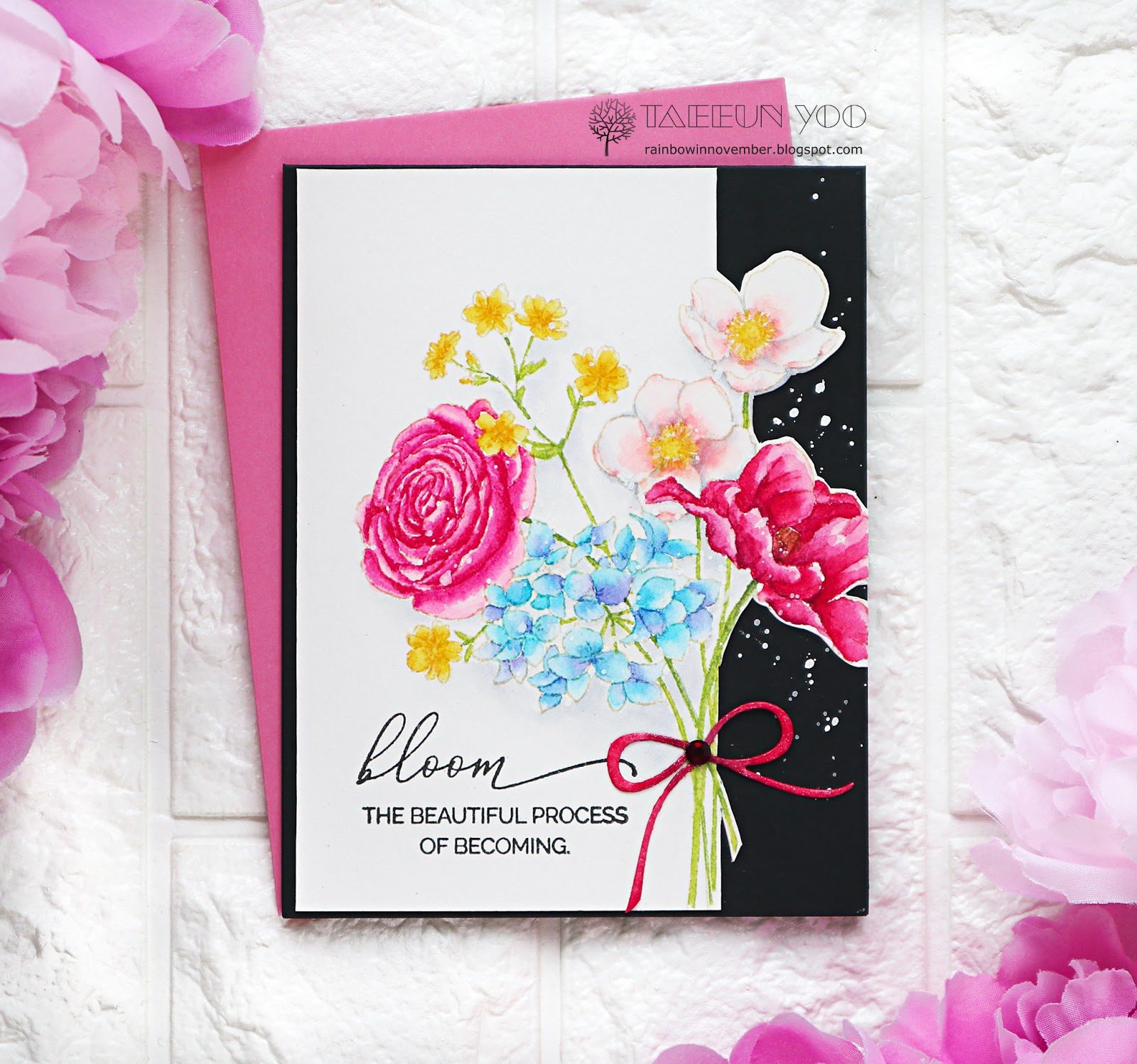 I stamped the image on a watercolor paper panel in Antique Linen DI to do no line coloring. Here also I used Karin brush markers for my coloring. 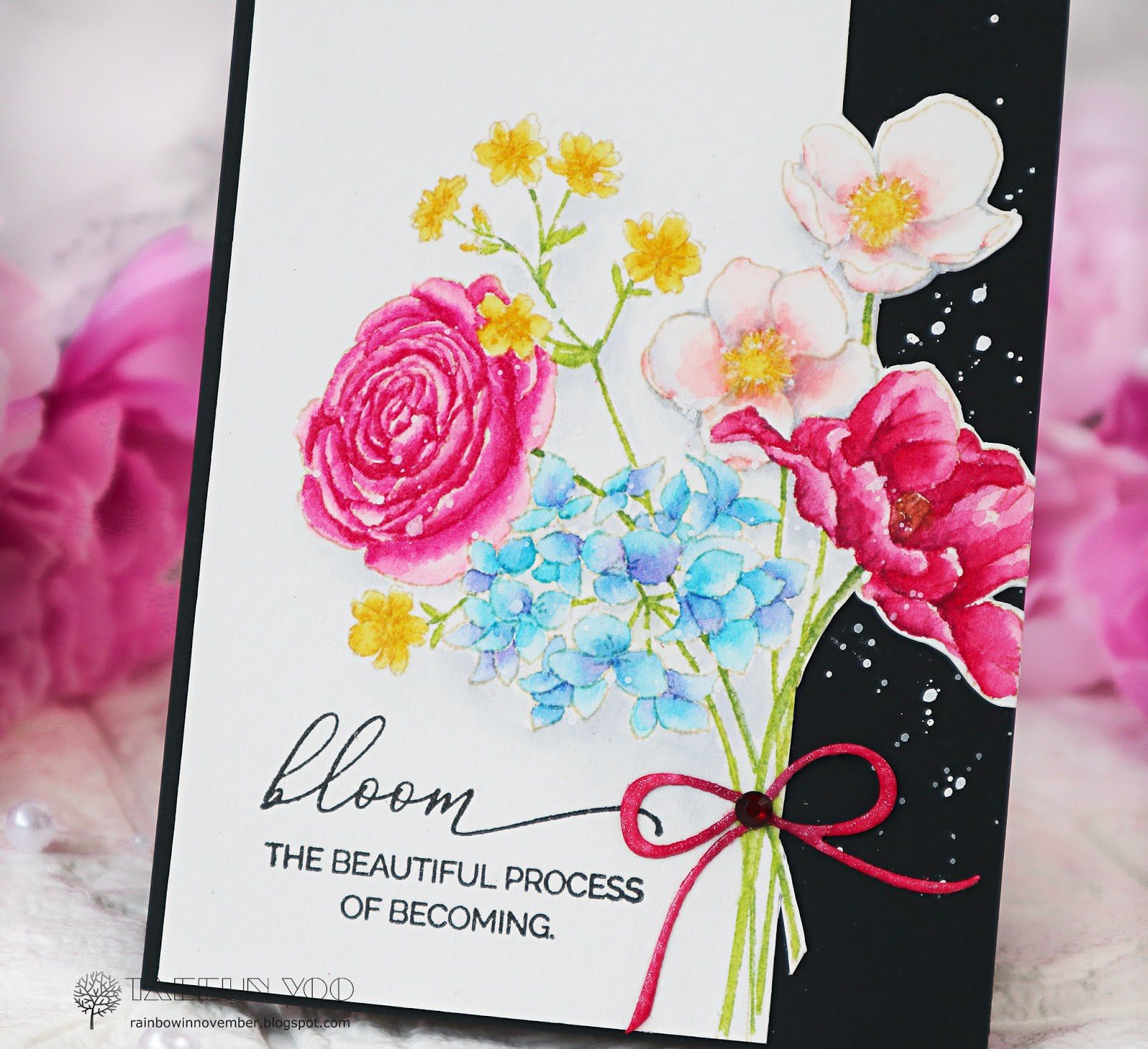 After the coloring was completed I cut off the right side of the panel following the outline of the image. I stamped the sentiment from Blooming Sentiments set (30-703) in a black pigment ink directly on the colored panel. 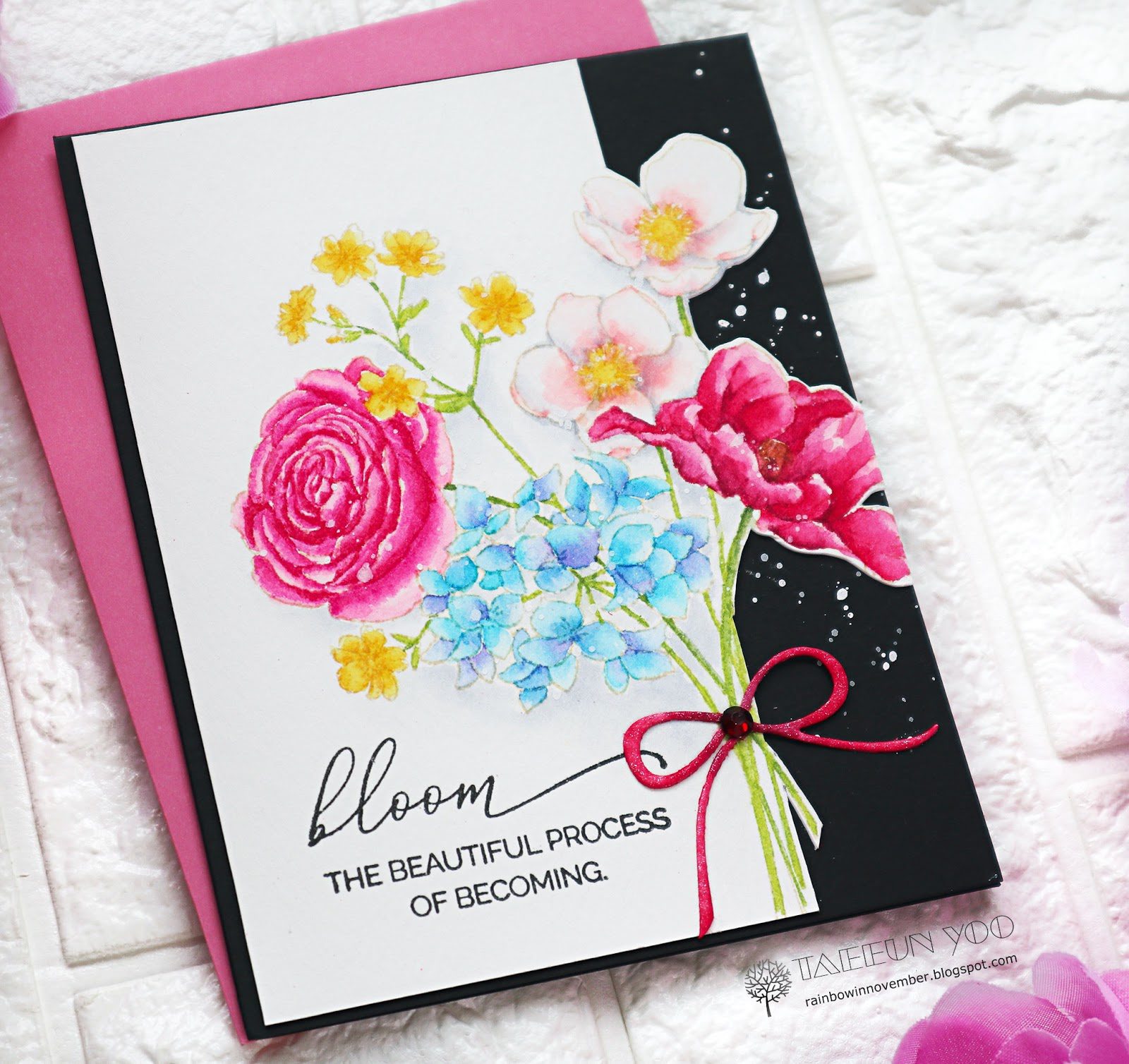 I splattered white opaque ink on a black cardbase and a bit on the flowers. After the splatters were dry I adhered the colored panel on the black cardbase. To embellish the pretty bouquet I added a bow cut using the bow die from the Red Roses (51-593) die set, colored in the same hot pink ink like the flowers. A dark red rhinestone on the bow finished off my card! 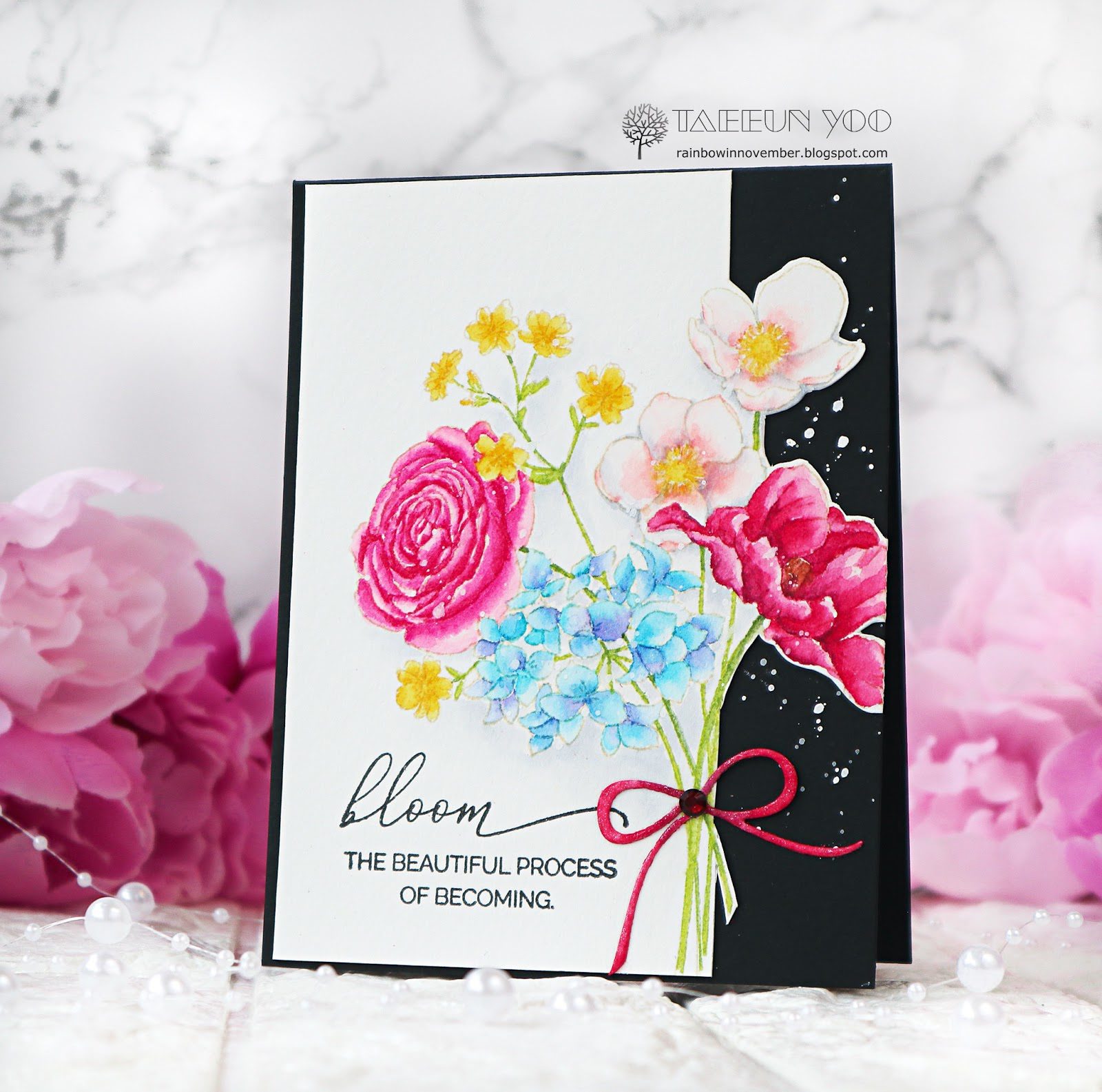 The beautiful floral cluster on the next one layer card is called Unforgettable (40-734), another pretty floral outline cling stamp. 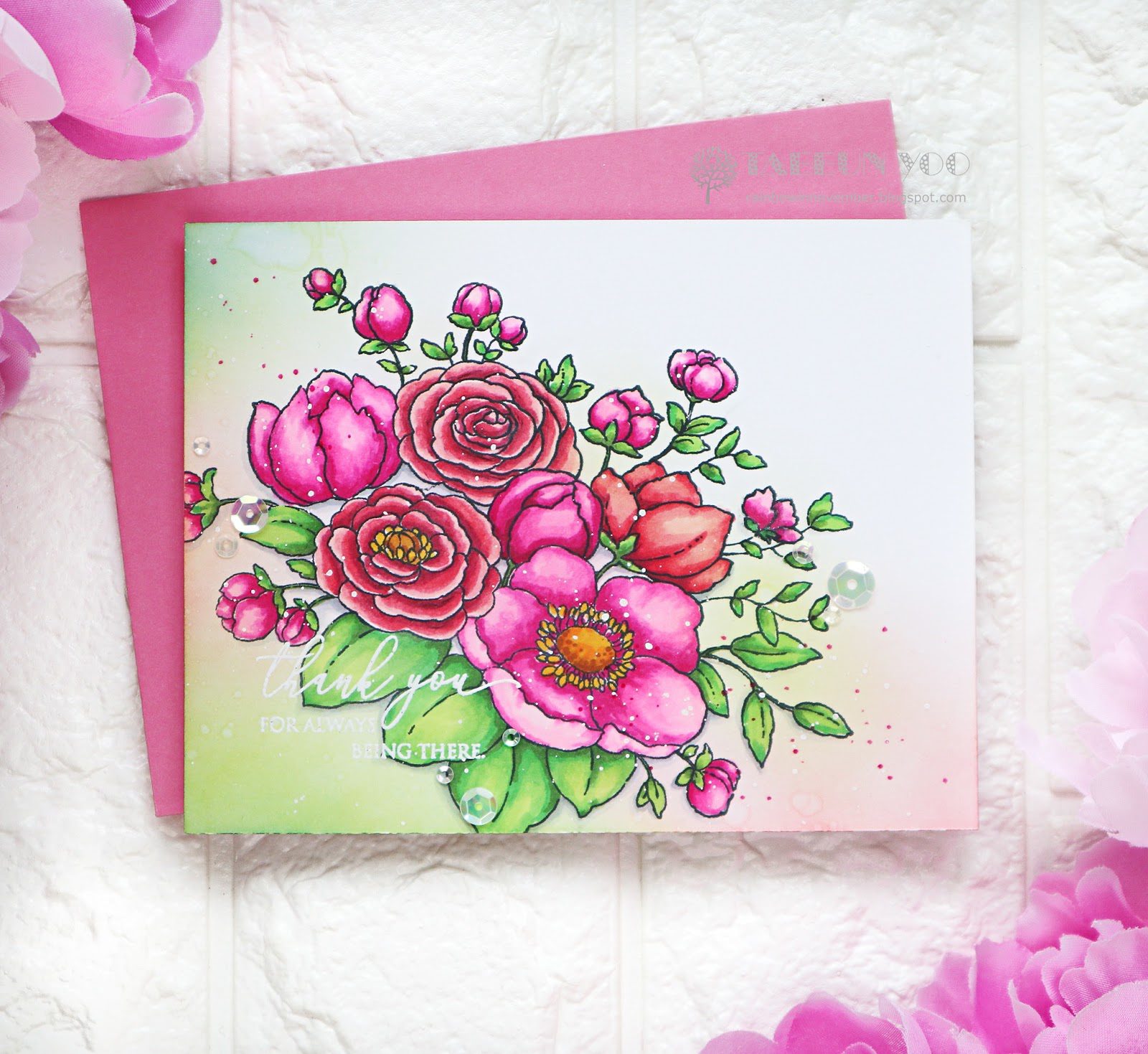 I started off by stamping the image on a Neenah solar white paper in Memento black ink. I then ink blended the panel in Twisted Citron, Squeezed Lemonade and Worn Lipstick DOX, splattered water on it and dabbed it off with a paper towel. 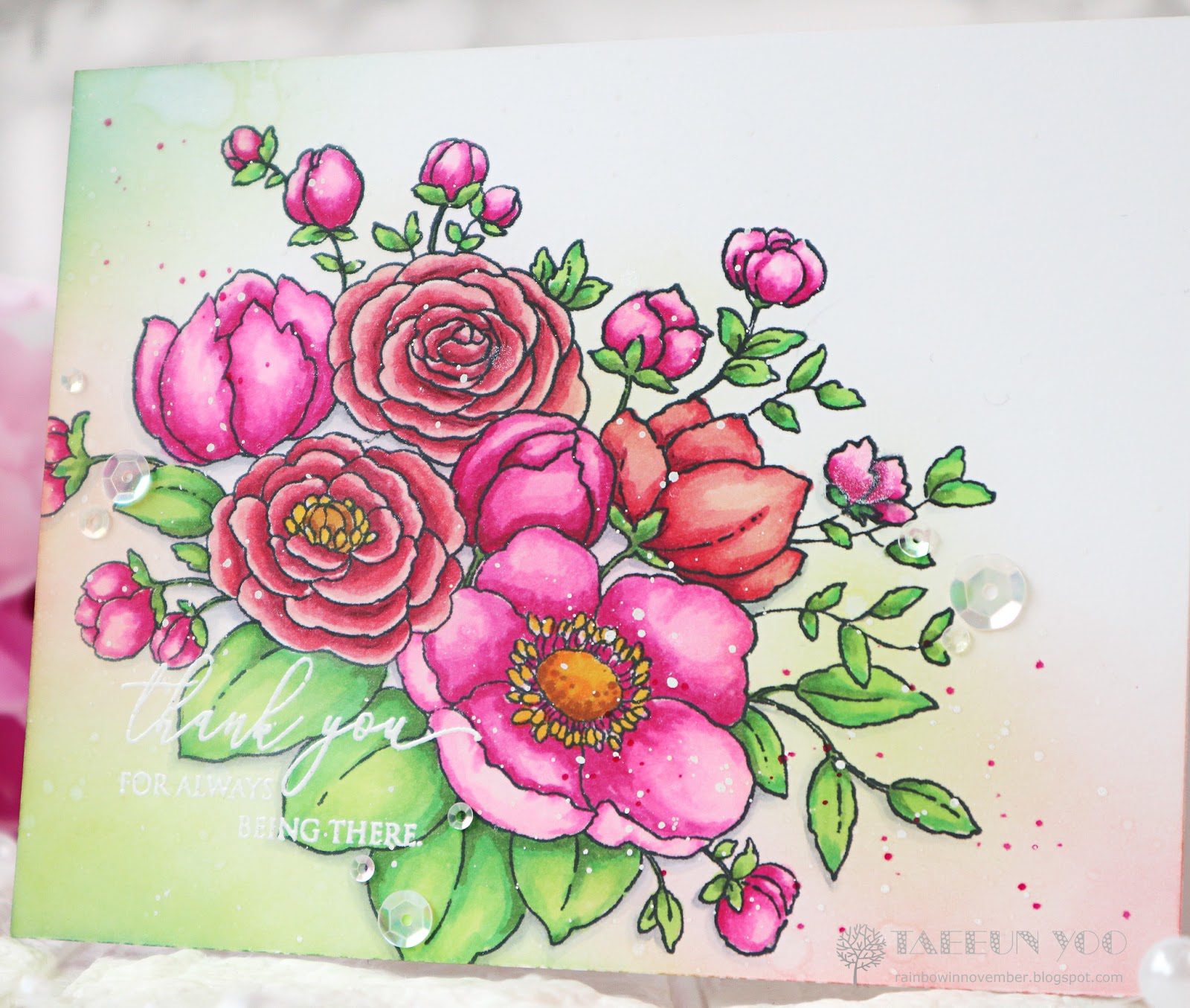 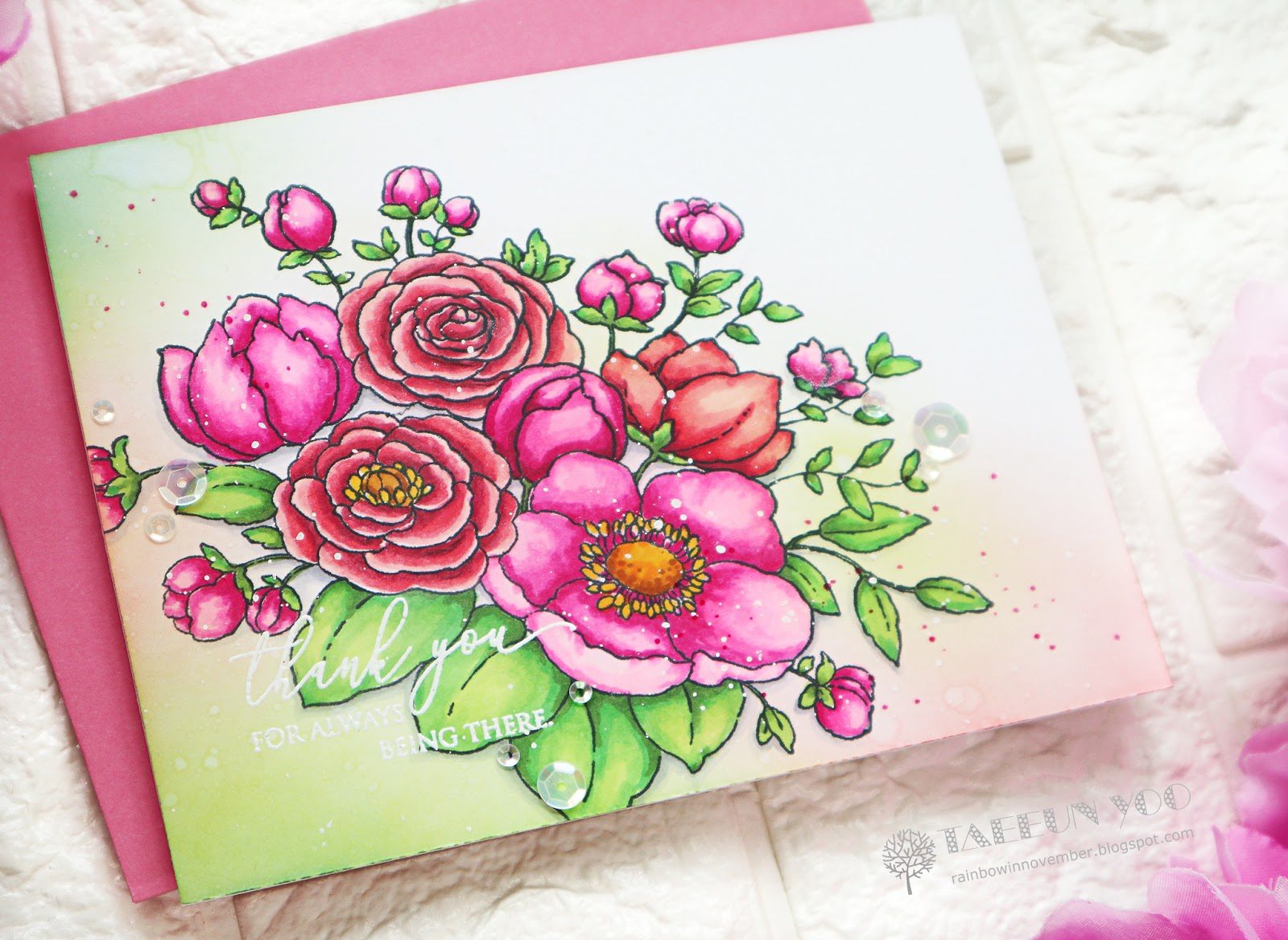 I white heat embossed the sentiment from Million Thanks (30-680) set on the colored panel. I splattered white opaque ink all over the panel and pink ink on the diagonal corners. 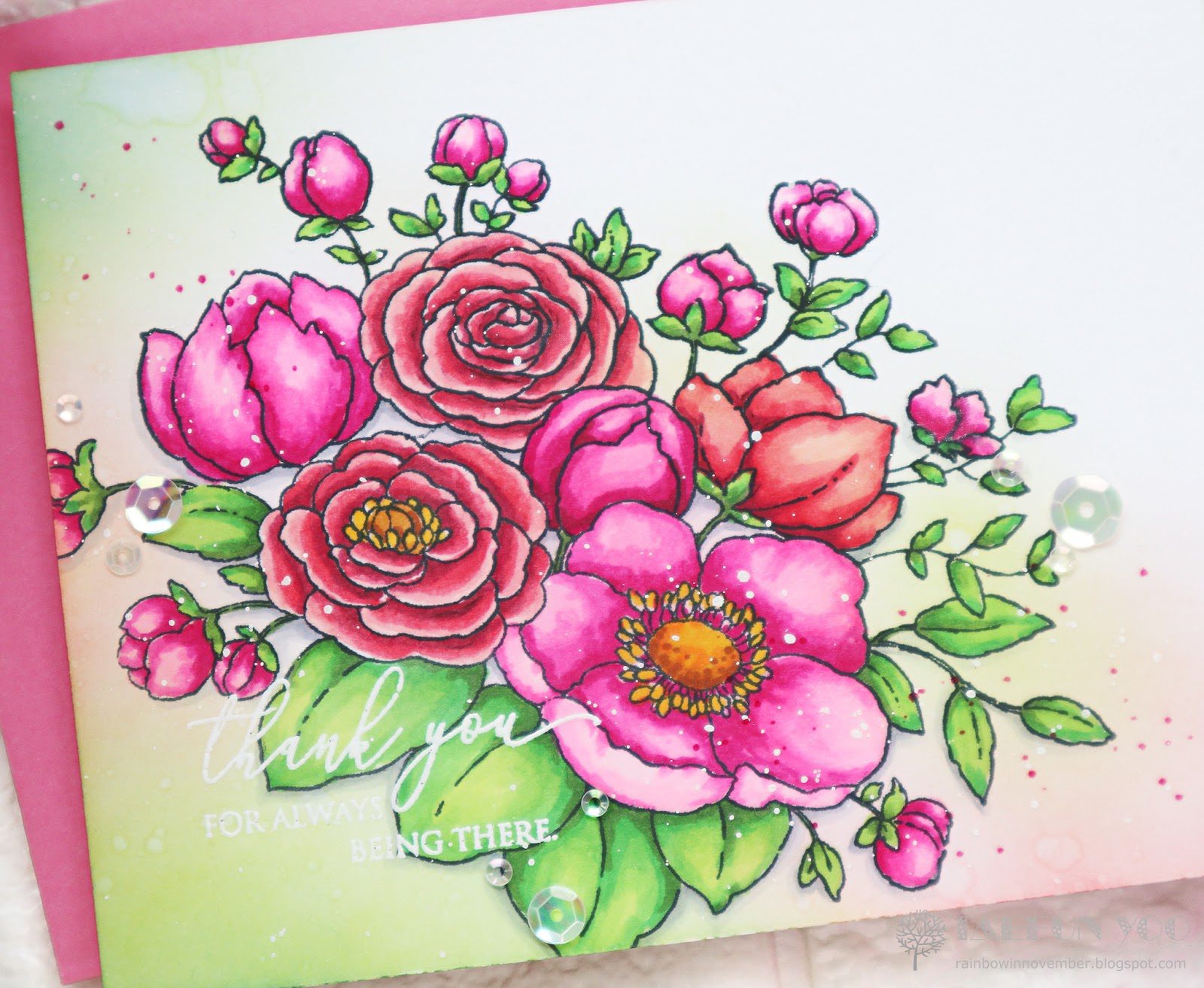 After the panel was dry I mounted it on a white cardbase and added some clear iridescent sequins. 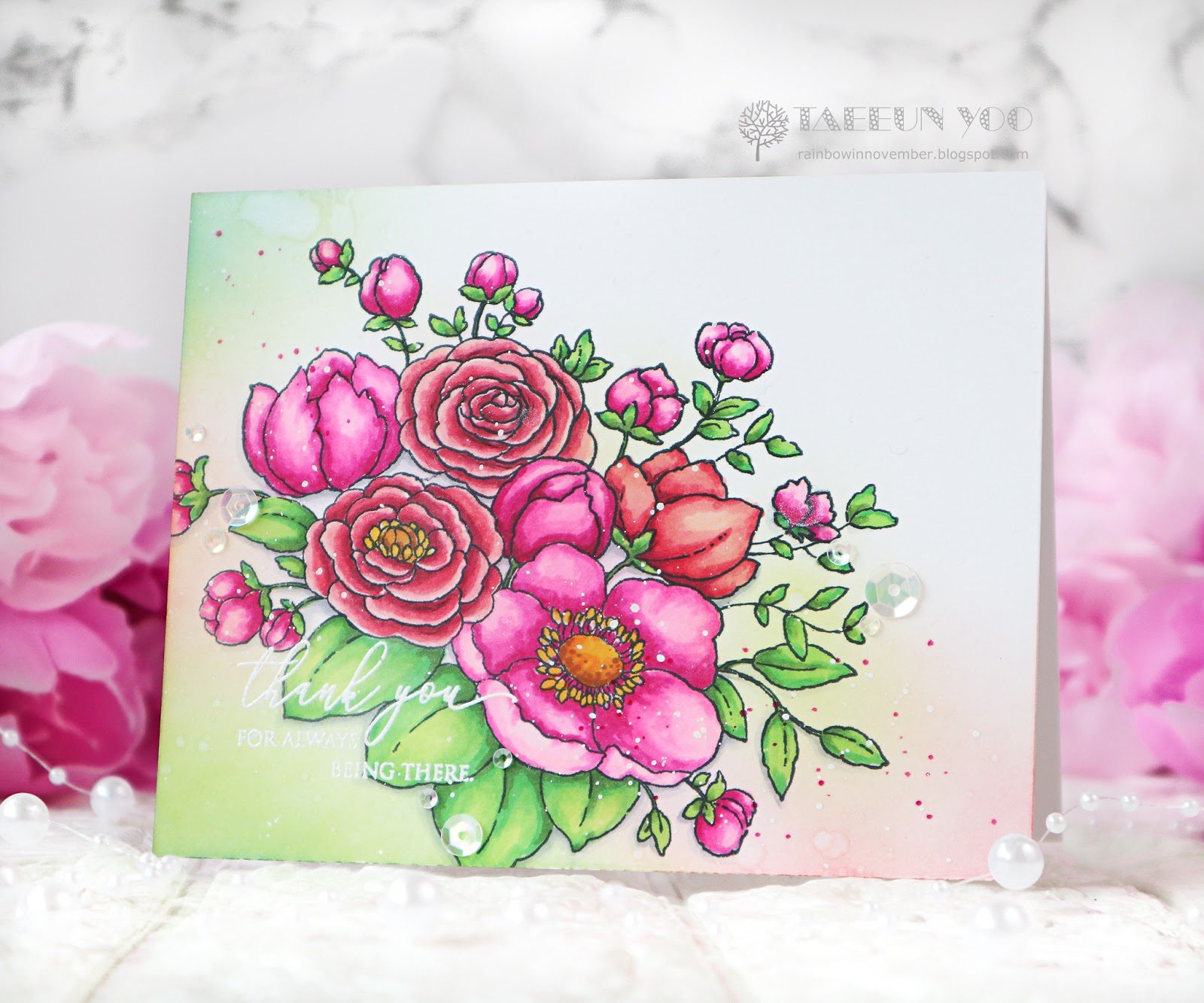 So now to the last card for today! This card is showcasing one of the images from Wings & Vases clear stamp set (30-704). 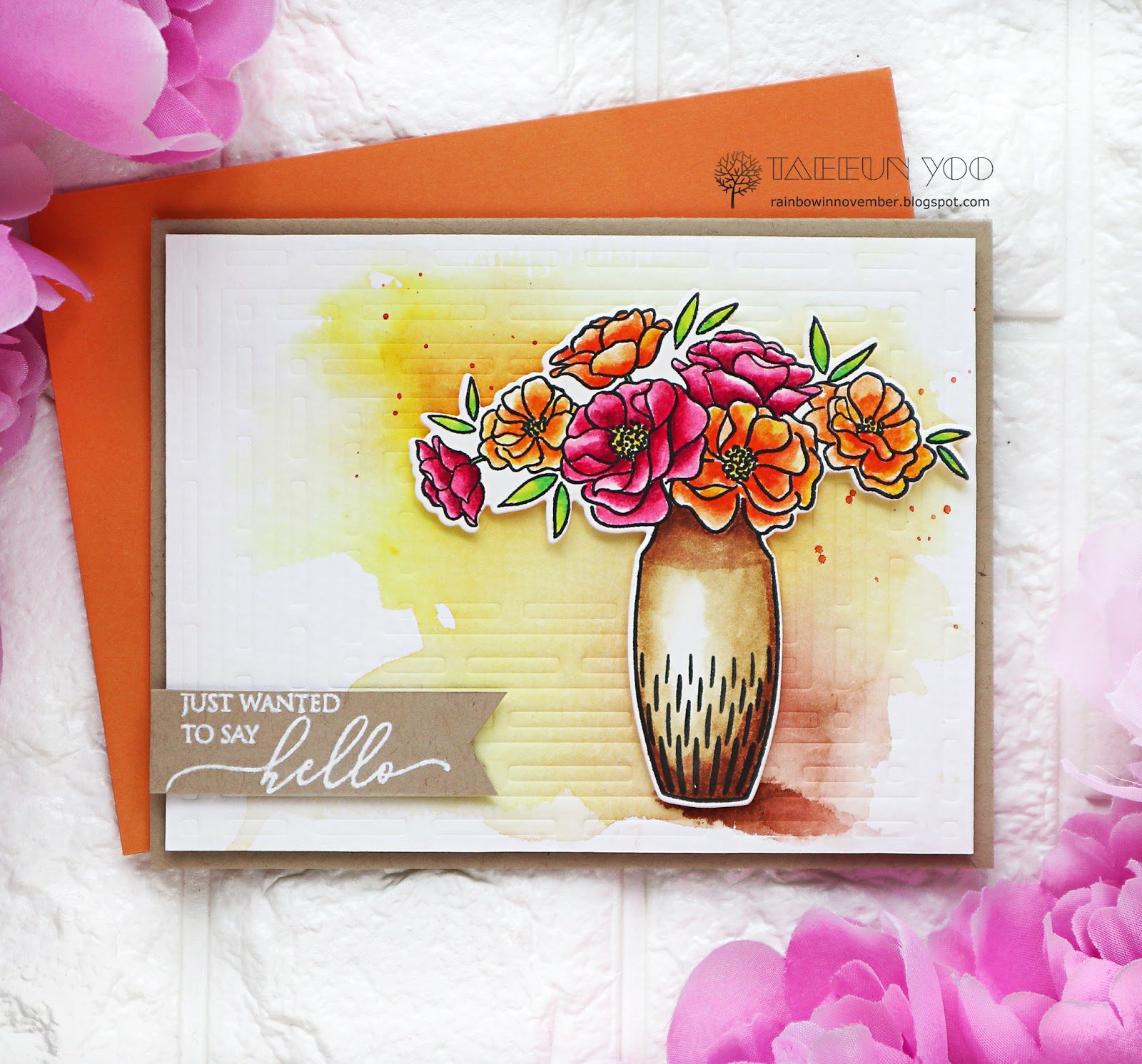 I stamped this pretty bouquet in the vase in Versafine black ink on Canson watercolor paper panel. I colored the image using Karin brush markers and cut it with the coordinating cut out (51-619). 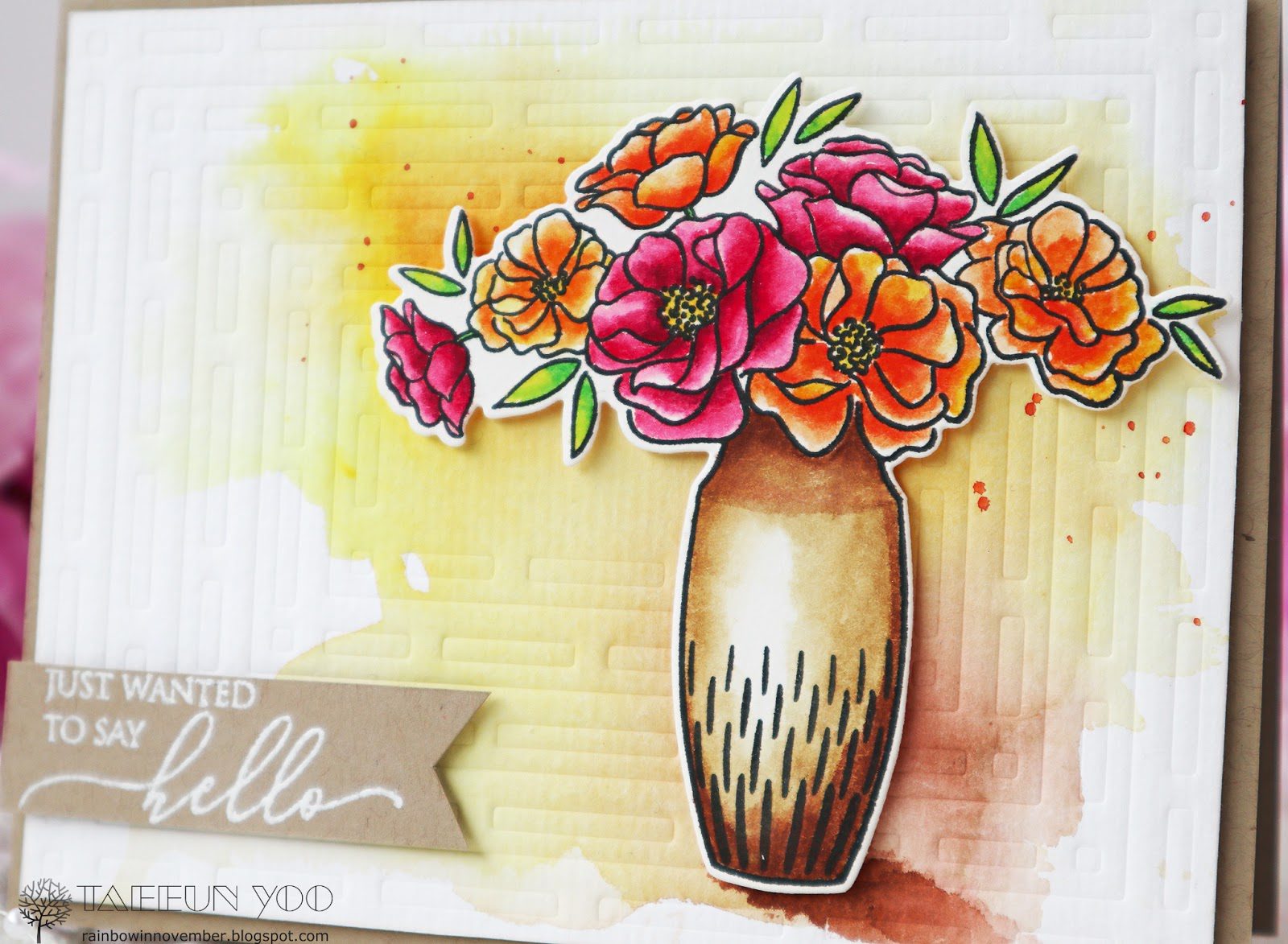 To create the background I watercolored a watercolor paper panel in yellow, orange and brown. After the panel was dry I splattered orange ink on it. To add some texture to the background I dry embossed the panel using the whole set of the Simple Stackers die set (51-613) and foam mounted it on a kraft cardbase. 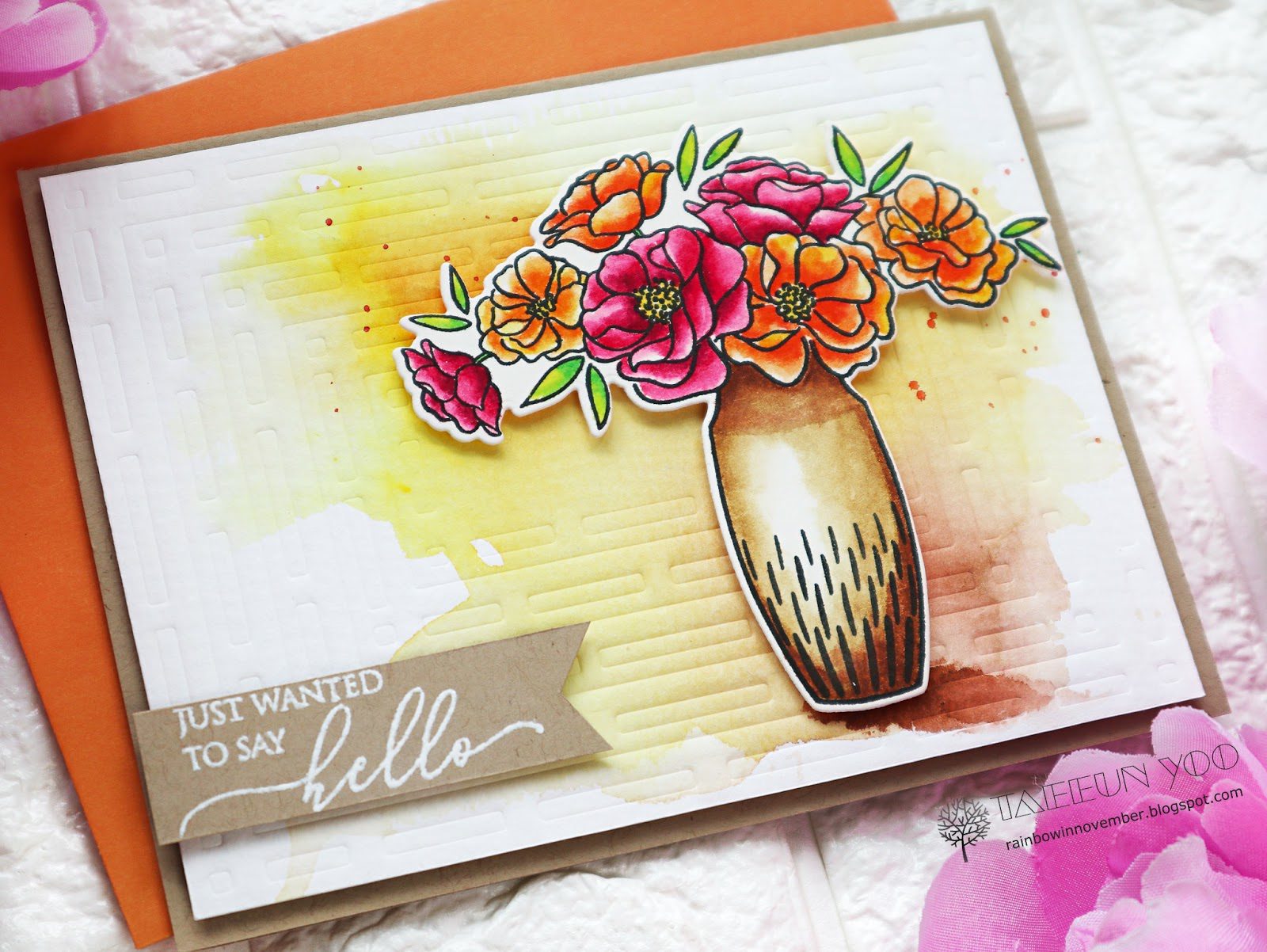 I adhered the vase with flowers on the background panel using some foam adhesives. The sentiment from the Magical Friendship set (30-707) was white heat embossed on a piece of kraft cardstock. I cut it in a fishtail banner and added it to the card. 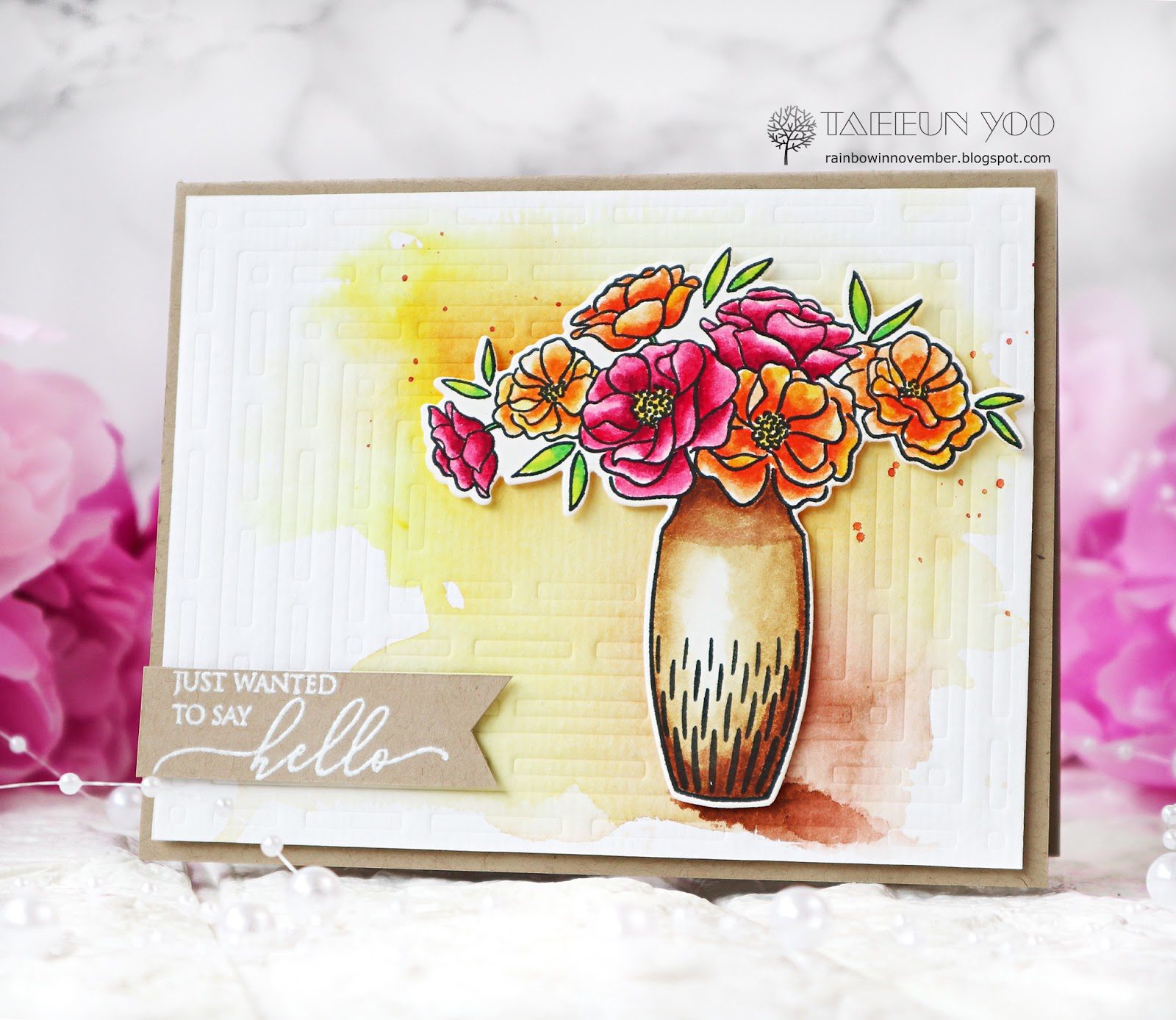 Hope you enjoyed looking my cards today! Thank you so much for staying with me through the long post :)!

Check out the new designs from Secret Garden release by Penny Black ! It is a huge release and I’m sure you’ll find something you love!

Wishing you all a happy and crafty week!
Hugs,
TaeEun